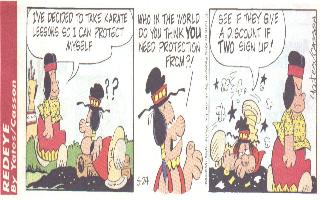 You may have been in Martial Arts too long when...

Aikido:
A martial art which allows you to defeat your enemy without hurting him. Unless of course his does not know how to ukemi in which case he has his wrist broken in about 20 places.

Arnis:
"Harness of the hand." A Filpino martial art, also known as eskrima and kali, centering around stick, blade and empty hand combat. Mispronanciation of the art guarantees a quick taste.

Buddhism:
A religious doctrine and a marketing tool to populate Asia with statues of short fat bald men.

Chi:
A biophysical energy generated through breathing techniques, which in defying the laws of physics and the basic scientific common sense, allows the user to develop super human strength.

Dan:
A term used in the Japanese martial arts for anyone who has achieved the rank of at least first-degree black belt.

Darn:
The sound uttered when the wearer of a Dan realizes that they will now get hit harder and more frequently during training.

Dojo:
"The place of the way." A training hall or gymnasium. Very similar to a B & D parlor but without the mistress.

Hakama:
A skirt sometimes worn in the Martial Arts but we don't really like to talk about it.

Iaido:
"Way of the sword." The modern art of drawing the samurai sword from its scabbard. A rather interesting art developed around the principle of "look how big mine is".


Judo:
"Gentle way." A Japanese art where grown men roll around cuddling each other without apparently doing any damage. These men are often closet Hakama wearers.

Jujitsu:
A lot like judo expect that these boys like to inflict slightly more damage. Tend to get very angry when accused of being Hakama wearers and often are heard saying "You gotta a big mouth"

Karate:
"Empty hand" or "China hand."  The primary purpose of this art is the destruction of wood and other natural products. Most Karate styles have a placing on Green Peace's most wanted list. This art will be outlawed by most countries by the turn of the century. Karate people enjoy pain, this is shown by their habit of fighting with their fists on their hips.

Kata:
A series of prearranged maneuvers practiced in many of the Oriental martial arts in order to avoid free sparring or anything else that may involve pain.

Kendo:
A strange and unusual past-time involving hitting each other with sticks and making in-human sounds. Could be a cult ??

Kung fu:
A generic term for a majority of the Chinese martial arts. Many of these arts involve the emulation of animals. Many students of Pray Mantis spend years attempting to obtain the other 4 legs while students of Monkey Kung-fu tend to find themselves being carted off by men in white lab coats.

Master:
A title bestowed on a martial artist who has attained advanced rank after long years of study or has started his own style after achieving kyu grades in at least 4 arts, or has completed the "Become a Master by Video" course available for only 19.95 per month.

Naginata:
A stick with a sharp bit on the end.

Ninja:
A rather confused individual who likes sneaking around at night in his pajamas.

Ninjutsu:
The art of being confused and sneaking around in your pajamas

Sparring:
Bashing each other senseless in the hope that nobody realizes that you don't know any kata or techniques.

Tae kwon do:
An unusual martial art that relies on its followers to have the flexibility of a professional ballet dancer.

Tai chi chuan:
Another unusual art that promises ultimate power from moving very slowly for many years. The drawback being that by the time you develop the ultimate power you are close to death anyway.

Zen:
The discipline of enlightenment related to the Buddhist doctrine that  emphasizes meditation, discipline, and the direct transmission of teachings from master to student. Mostly taught by rather old and confused monks who have had one too many rocks fall on their heads during waterfall meditation. Works best when sitting in a cave facing a wall for 10 years or so.